Here in Singapore, quarantine-free entry for fully vaccinated travellers has been approved from the 1st of April. It is a great encouragement that similar good trends can be seen in many other ASEAN countries. In Japan, quarantine-free entry is now allowed from most countries if you have got a booster dose vaccine, although it is still limited to business travellers. I hope such progress will help ASEAN economies overcome various global concerns, such as the crisis in Ukraine and global inflation, and realise a strong economic recovery while deepening cooperation with Japan.

I'm happy to tell you that the AMEICC Secretariat, in cooperation with various organizations, is now in full swing preparing for the second edition of the ASEAN Japan Business Week (AJBW), the first of which was held in May 2021. As we did last year, we are planning to host a lot of distinguished speakers and deliver attractive and substantial contents for all who are interested in co-creation of better future for ASEAN and Japan. We will make an official announcement shortly, so please stay tuned. 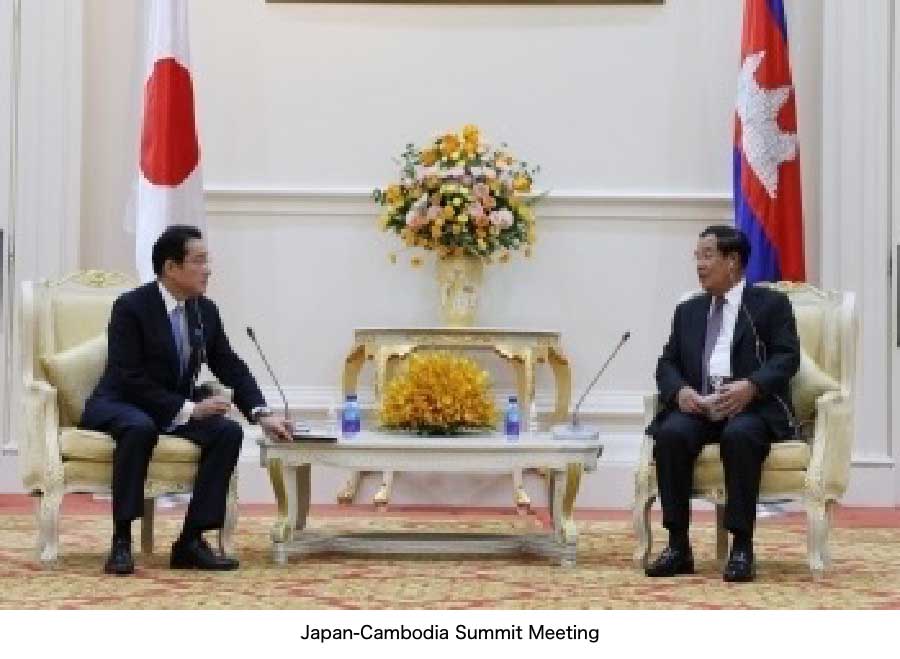 In terms of Economic relations, economic cooperation under “the Asia Japan Investing for the Future Initiative (AJIF)” was highlighted, which was announced by H.E. Hagiuda Koichi, Minister of Economy, Trade and Industry of Japan this January, and also covered at previous 9th DISG webinar held last month. Please refer to the third content of this newsletter.

Specifically, the two Prime Ministers consented to foster the development of high-skilled industrial human resources in cooperation with Cambodia-Japan Digital Manufacturing Center (CJDM) of the Royal University of Phnom Penh, to strengthen the resilience of supply chains and support the efforts of both countries’ businesses to create new industries by solving social issues through utilizing digital technology.

Also, in terms of cooperation in digital field, the two Prime Ministers discussed supporting the development of a central bank settlement system “Bakong”, and the realization of smart cities in Cambodia. In Addition, with regard to the cooperation with ASEAN, Prime Minister Kishida stated that Japan would hold a special summit in Japan next year to commemorate the 50th year of ASEAN-Japan Friendship and Cooperation and upgrade ASEAN-Japan relations to a new height. Prime Minister Hun Sen expressed support for Japan's initiative. 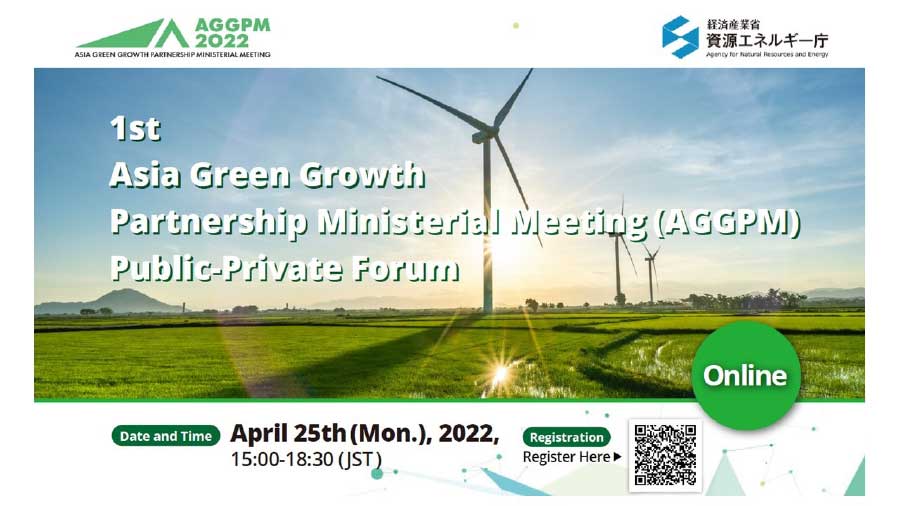 This forum will be held to disseminate the importance of industry-government-academia efforts, innovation promotion, and international cooperation for accelerating various and pragmatic energy transitions in Asia, as confirmed at the First AGGPM held on 4th October, 2021.

The forum will focus on “innovation” and “finance” to support energy transitions, and feature a variety of sessions to present concrete projects and efforts by industry, government and academia in Asia and Japan.

The forum will open with keynote speeches by ministers from Asian countries including Indonesia, Thailand, and Vietnam, followed by a special ceremony session that includes 1) an MOU signing ceremony among private companies on projects and initiatives contributing to energy transitions in Asia, 2) the presentation of interim report on the discussion of promoting Transition Finance in Asia by the ATF Study Group led by private financial institutions, and 3) the presentation of final report on a roadmap analysis for the realization of carbon neutrality in ASEAN by the Economic Research Institute for ASEAN and East Asia (ERIA) and the Institute of Energy Economics, Japan (IEEJ).

Additionally, the forum will hold panel discussion sessions under the themes of 1) the mobilization of finance and 2) the promotion of innovation that are essential for promoting energy transitions in Asia. Prominent figures from international organizations and private companies are confirmed to join the sessions to have lively discussions on the future pathways of energy transitions in line with actual situations in Asia.

We look forward to your prior registration and attendance in this productive event. 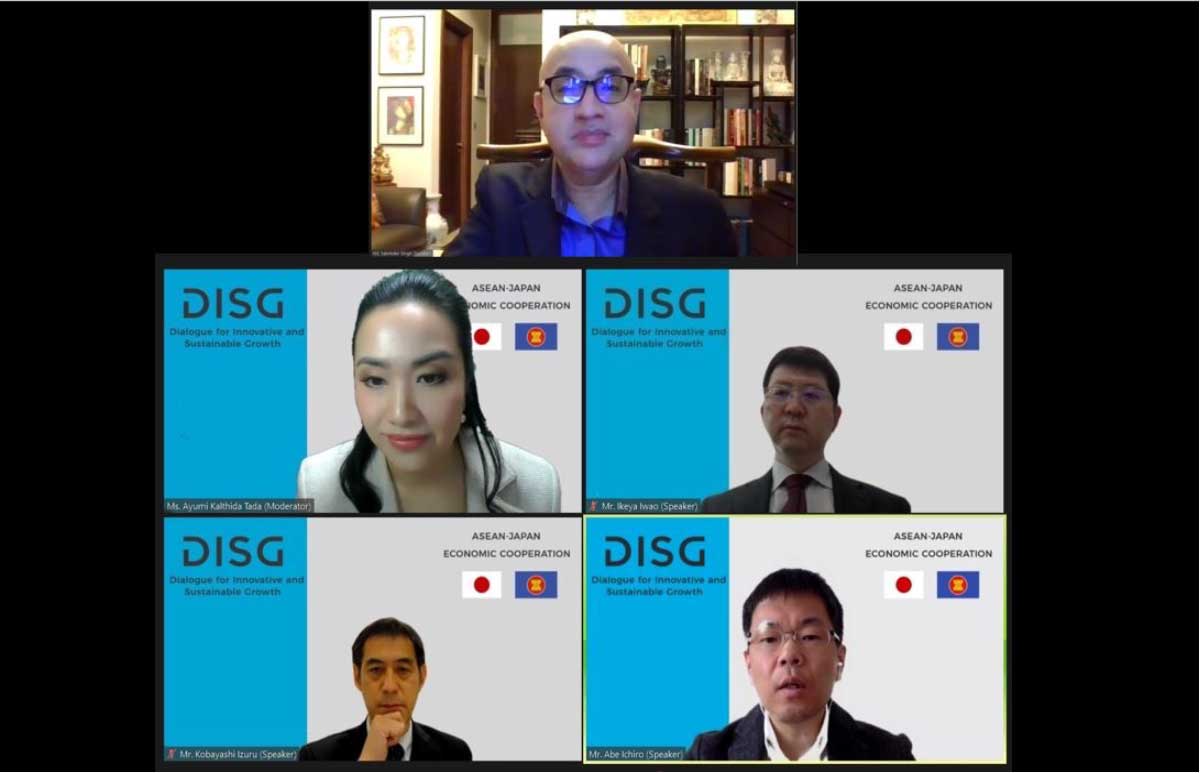 The 9th DISG webinar on the theme of “Japan’s New Initiatives AJIF and AETI - For starting new economic relationship between Asia and Japan -” was held on 4th March 2022. Following is executive summary of the webinar.

(Opening Remarks)
H.E. Satvinder Singh, Deputy Secretary-General of ASEAN for ASEAN Economic Community shared ASEAN’s expectations for stronger ASEAN-Japan cooperation, especially on digitalization and sustainability. ASEAN welcomes the Asia-Japan Investing for the Future Initiative (AJIF) that aims to enhance ASEAN’s competitiveness, and resonates with ASEAN’s sustainable growth agenda. AJIF amplifies Japan’s support for sustainable growth and carbon neutrality initiatives in ASEAN, which includes the Asia Energy Transition Initiative (AETI). ASEAN strives to implement a balanced mix of policies for recovery, and is consolidating efforts on digitalization and sustainability. In this context, ASEAN and Japan should work on three areas, namely, (i) a stronger partnership for digital economy, in the context of the Bandar Seri Begawan Roadmap and the Consolidated Strategy for the Fourth Industrial Revolution for ASEAN; (ii) partnership for innovation and sustainability, particularly on sustainable technologies and financing for green industries, in line with the Framework for Circular Economy for the AEC; and (iii) deeper collaboration with Japanese private sector to help ASEAN build a professional workforce of the future to support ASEAN’s digital transformation and sustainable development. ASEAN-Japan partnership is key to achieving innovation and sustainable development in the region. With Japan’s support, ASEAN can achieve successful ASEAN economic integration, and in return foster mutual interests of growth in the region.

(Presentation 1: Asia-Japan Investing for the Future Initiative (AJIF))
Mr. Ikeya Iwao, Director for Asia and Pacific Division, Trade Policy Bureau, METI, Japan explained the overview of the AJIF which defines the new cooperative relation between ASEAN and Japan in the economic area with keywords of “innovation”, “sustainability”, and “co-creation” and presented the principles of AJIF. He gave examples of ongoing projects being undertaken by Japanese companies. He explained more about the five cooperation areas that would be strengthened by Japan namely 1)supply chain, 2)connectivity, 3)digital innovation, 4)human resources, and 5)green industries. He introduced the Japanese government’s support related to supply chain resilience, innovation, and energy transition. He also introduced the Asia Digital Transformation (ADX) projects in cooperation with ASEAN and Japanese companies by using innovative technologies aiming at solving socio-economic challenges in the ASEAN region.

(Presentation 2: Overview of Program for Strengthening Overseas Supply Chains and Feasibility Study Project for Overseas Deployment of High-Quality Infrastructure)
Mr. Abe Ichiro, Director of Trade Promotion Division, Trade and Economic Cooperation Bureau, METI, Japan introduced two programs under AJIF. On the first program, he presented Program for Strengthening Overseas Supply Chains, ongoing subsidy program for capital investment by Japanese companies in the ASEAN region. He introduced that the fifth public invitation has been starting from January until the end of March with expectation for many applicants to this program. Then, he continued to explain the second program, the Feasibility Study Project for Overseas Deployment of High-quality Infrastructure, which METI provided support to private companies for feasibility study on infrastructure projects in overseas, contributing to the sustainable growth of ASEAN countries. He further highlighted the two pillars under the second program that covered both upstream and downstream of infrastructure development.

(Presentation 3: Japan’s Support for Energy Transitions in Asia)
Mr. Kobayashi Izuru, Deputy Commissioner for International Affairs, Agency for Natural Resources and Energy (ANRE), METI, Japan identified the possible challenges for ASEAN over the early retirement of coal fired power plants and introducing renewable energy, especially solar and wind in order to reduce GHG emissions. Then, he gave the explanation on the Asia Energy Transition Initiative (AETI) as a concrete support program by Japan to realize a realistic energy transition in Asia such as formulation of the energy transition roadmaps and USD10 billion financial support to various projects, etc. He also highlighted the Asia Growth Partnership Ministerial Meeting (AGGPM) and the COP26 which were held last year that reiterated Japan’s long-term goal of carbon neutrality by 2050 and Japan’s wide range of assistances to Asian countries, based on AETI. He also presented the recent visit of H.E. Hagiuda Koichi, Minister of METI, Japan, to Indonesia, Singapore, and Thailand, where the Memorandum of Cooperation (MOC) were signed by respective energy ministers to promote cooperation based on AETI. For future events related to AETI, he introduced the AGGPM Public-Private Forum to be held on 25th April 2022, and the 2nd AGGPM that be also convened on the 26th September this year.

Japan External Trade Organization (JETRO) released its latest survey on the business conditions of Japanese companies in 20 countries and regions in Asia and Oceania in English this March, which is translation of the original report in Japanese which was released in December 2021. This survey has been conducted since 1987, making this year the 35th version. The results are as follows.

Method: Questionnaire
Period: From 25th August to 24th September 2021
Target companies: Japanese-affiliated companies active in a total of 20 countries and regions.
Number of surveys sent out to: 14,175 firms.
(Valid responses: 4,635 firms with a valid response rate of 32.7%.)

One of the important key findings is that with the resumption of economic activities amid the pandemic of Covid-19, demand recovered through increased sales in local markets and exports. Business confidence of Japanese companies in most countries/regions improved. In some countries/regions, the percentage of profitable companies exceeded the level before the pandemic of Covid-19(2019). It showed a V-shaped turnaround in India, where the restrictions on economic activities were almost lifted. On the other hand, in ASEAN, capacity utilization rates declined due to the tightening of operational regulations amid the spread of the delta variants. Recovery was lagging in several countries such as Vietnam.