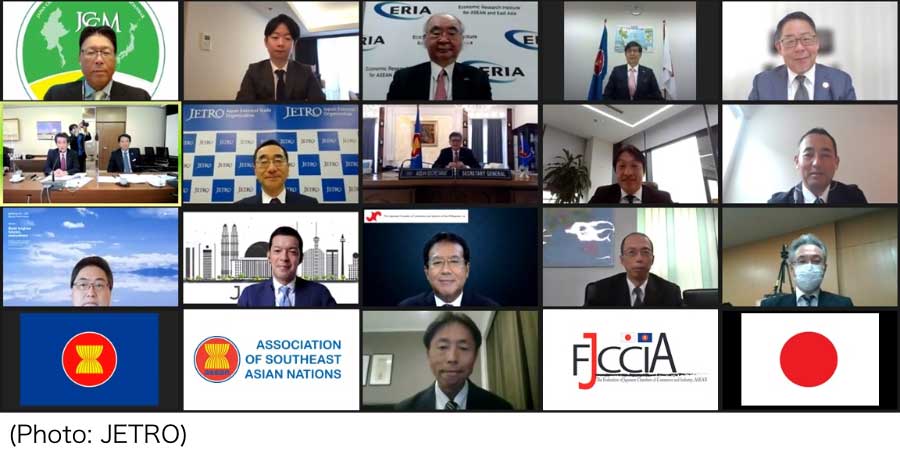 Mr. INOUE Soichi, Chairman of the Federation of Japanese Chambers of Commerce and Industry in ASEAN (FJCCIA), held an online dialogue with His Excellency, Dato Lim Jock Hoi, Secretary-General of ASEAN on July 7.

The FJCCIA is a coalition of 10 Japanese chambers of commerce and industry from 9 of the 10 ASEAN countries, with a membership of 7,332 companies as of June 2021. The FJCCIA has been holding dialogues with the Secretary-General of ASEAN once a year since 2008. (In 2020, - due to the spread of the new coronavirus, the dialogue however was postponed and only emergency proposals were made.)

From the Japanese side, His Excellency Mr. CHIBA Akira, the ambassador of Japan to ASEAN, Dr. NISHIMURA Hidetoshi, Secretary-General of the Economic Research Institute for ASEAN and East Asia (ERIA) and Mr. SASAKI Nobuhiko, Chairman of Japan External Trade Organization (JETRO), attended the meeting. It was the 13th dialogue between the FJCCIA and the ASEAN Secretary-General.

Following the ASEAN Comprehensive Recovery Framework (ACRF), which ASEAN aims to achieve, Chair INOUE proposed cooperation and requests in three areas: i) maximizing the potential of the ASEAN intra-market and broader economic integration, ii) inclusive digital transformation, and iii) a more sustainable and resilient future. He also reported on the recent tightening of visas and work permits for expatriates in Vietnam, Singapore, and other countries, and requested for the ASEAN Secretariat to communicate with the ASEAN Member States, saying that this would lead to a decline in future investment and technology transfer.

Besides, he added that FJCCIA welcomed the progress of the DISG and looked forward to further cooperation and support by the ASEAN Secretariat and AMS in the further development of the DISG in the future.

Other Japanese Chambers of Commerce and Industry also proposed the following issues with key recommendations.

Furthermore, JETRO expressed its desire to minimize the impact of infectious disease control measures on the supply chain in cooperation with the government.

In response to Japan's proposal and request, Dato Lim responded that the ASEAN Secretariat would raise these key recommendations of the FJCCIA to the AEMs and relevant sectoral bodies, with follow-up actions and would provide their responses in timely manner.