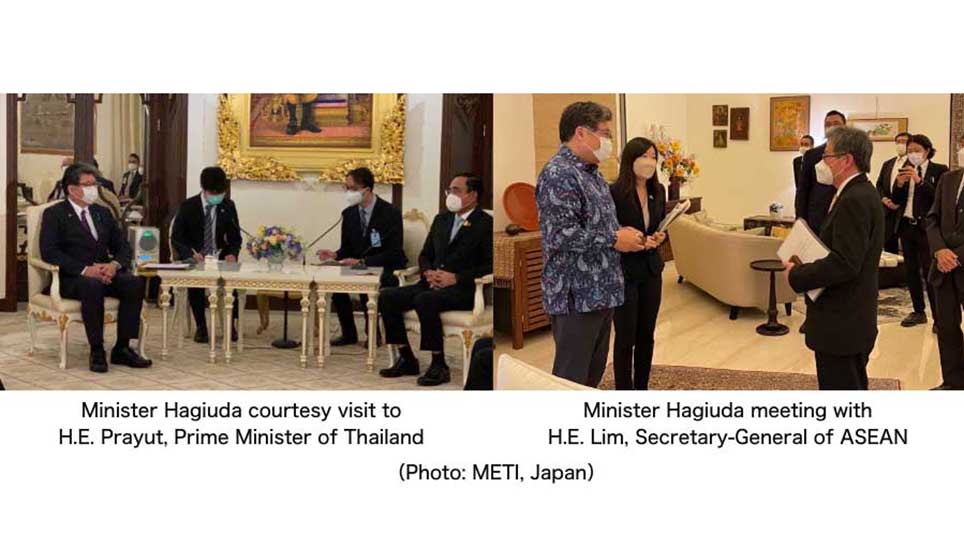 From January 9th (Sun.) to January 14th (Fri.), H.E. Koichi HAGIUDA, Minister of Economy, Trade and Industry of Japan, visited Indonesia, Singapore, and Thailand to hold bilateral meetings with relevant ministers and others. In addition, making use of this opportunity, Minister Hagiuda announced the ASIA-Japan Investing for the Future Initiative (AJIF), a new initiative that provides the direction for economic cooperation in Asia, with a view toward the post-pandemic era.

Minister Hagiuda participated in an online event co-hosted by Foreign Policy Community of Indonesia (FPCI), the Economic Research Institute for ASEAN and East Asia (ERIA), the Ministry of Economy, Trade, and Industry (METI) of Japan and AMEICC Secretariat. In the forum, Minister Hagiuda delivered his keynote speech and announced AJIF, a new initiative that provides the direction for economic cooperation in Asia, with a view toward the post-pandemic era.

Please see here for our webinar report and outline of AJIF

During the stay in Indonesia, Minister Hagiuda held talks with Mr. Arifin (Minister of Energy and Mineral Resources), H.E. Lutfi (Minister of Trade), H.E. Agus (Minister of Industry), H.E. Luhut (Coordinating Minister for Maritime and Investment Affairs), and H.E. Airlangga (Coordinating Minister of Economic Affairs). They discussed a wide range of issues, including energy transitions and efforts toward deepening bilateral economic relations based on the concepts behind AJIF. He also had a meeting with H.E. Lim, Secretary-General of ASEAN, and they exchanged views on RCEP, economic cooperation between ASEAN and Japan, and more.

During the stay in Singapore, Minister Hagiuda met with Singapore’s Minister of Trade and Industry, H.E. Gan Kim Yong, to discuss a wide range of subjects including bilateral relations, AJIF, RCEP, CPTPP, and so on. He also visited a shared office space to exchange views with Japanese companies involved in venture capital and startups, etc.