Last month became another important month for ASEAN-Japan economic cooperation. The 37th ASEAN Summit and related summits were held on 12th-15th November with many fruitful discussions under the chair country: Vietnam. Regarding our DISG, we are privileged to see that the Joint Statement on the ASEAN Outlook on the Indo-Pacific (AOIP) at the 23rd ASEAN-Japan Summit nominated the DISG as an important initiative to advance.

Moreover, we were excited to have witnessed the historical moment of the signing of the Regional Comprehensive Economic Partnership (RCEP) Agreement for which both ASEAN and Japan made great efforts throughout its eight-year-long negotiations.

Through this newsletter, we proudly share these highlights of the month with you. 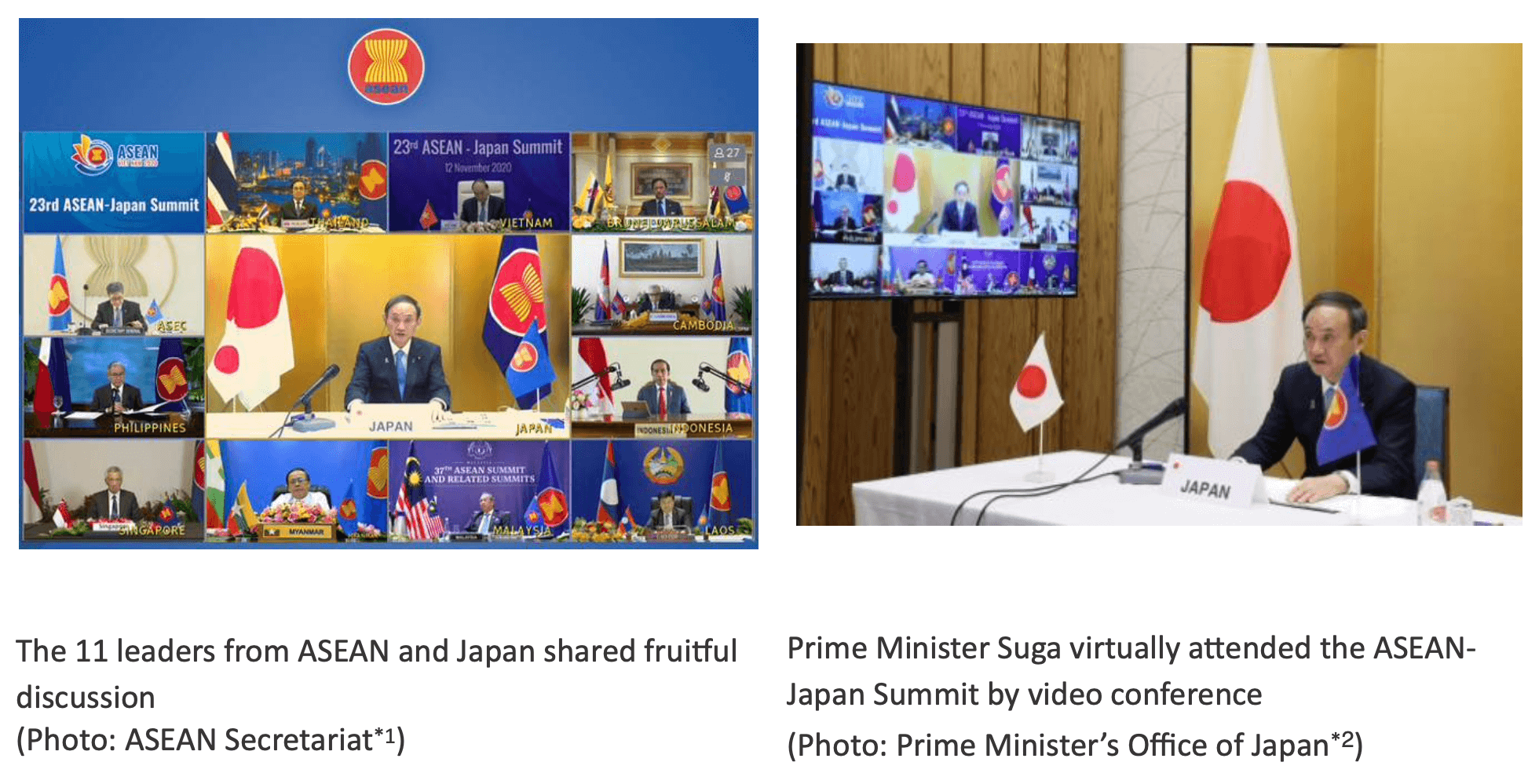 Additionally, we would like to congratulate VCCI and ASEAN-BAC on the successful ASEAN Business and Investment Summit (ABIS) on November 13th 2020 where top leaders and business executives exchanged their insights on “Digital ASEAN: Sustainable and Inclusive”. From Japan, Chairman and CEO of The Japan External Trade Organization (JETRO), Mr. Sasaki Nobuhiko participated in the panel discussion on “Technology and The Future of Work in ASEAN” and discussed the contribution of Japanese industry to the future of work in ASEAN after the pandemic.
(Click here for further details of ABIS)

On November 15th 2020, the 4th RCEP Summit Meeting and a signing ceremony of the RCEP Agreement were held, bringing together 15 countries in total: 10 ASEAN member states, Japan, China, the Republic of Korea, Australia and New Zealand. At the Summit Meeting, participants confirmed and welcomed completion of the eight-year-long negotiations from the inauguration thereof in November 2012. From Japan, Economic Minister Mr. Kajiyama signed the RCEP Agreement together with Mr. Motegi, Minister for Foreign Affairs.

Dato Lim Jock Hoi, Secretary-General of ASEAN, added that “The signing of RCEP Agreement is a historic event as it underpins ASEAN’s role in leading a multilateral trade agreement of this magnitude, despite global and regional challenges and eight years of negotiations. RCEP will give a much-needed boost for a swift and robust recovery for businesses and peoples in our region particularly during the current COVID-19 pandemic crisis.”

Representing Japanese business, Mr. Mimura, Chairman of the Japan Chamber of Commerce and Industry, said “It will be an important first step toward achieving Japan’s aim of the "realization of a free and open Indo-Pacific". As the supply chain built by Japanese companies is expanding, particularly in Asia, the conclusion of this agreement has great significance.” (Please see here for his full comment)

Mr. Nakanishi, Chairman of Keidanren, made the comment that “Keidanren believes that the RCEP will contribute to the expansion of trade and investment and to the formation of efficient and resilient supply chains, bringing further prosperity and stability to the region including neighboring countries of Japan.” (Please see here for his full comment)

The 2nd DISG Webinar of the Series:
“Enhancing Digital Trade Connectivity in ASEAN”

Following the Kick-off Webinar, the DISG webinar continued the series with the 2nd Webinar: “Enhancing Digital Trade Connectivity” on November 16th, 2020. In this webinar, key figures in the field of digital trade/trade facilitation from ASEAN and Japan discussed the benefits brought to relevant players by trade digitalization, its future potential and the expected Japan’s contribution to ASEAN.

After the keynote speech, a panel discussion was held with three additional speakers: Mr. Nitas of the ASEAN Secretariat, Ms. Angie of Singapore Customs and Mr. Hirakuri of Mitsubishi Corporation. The panelists discussed what kind of collaborations would be expected among other digital trade platforms or between government and the business, and what elements are required in ASEAN in digitalizing trade procedures.

On November 5th, it was announced that 21 projects were selected as a second batch for the Financial Support Program for Strengthening Overseas Supply Chains. The Financial Support Program, funded by METI Japan and one of the flagship projects among ASEAN-Japan Economic Resilience Action Plan, aims to enhance the viability of industries by strengthening supply chain resilience between ASEAN and Japan. The 21 projects comprise 16 demonstration projects and 5 feasibility studies projects and are planned to conduct all over ASEAN countries. One demonstration project was introduced in the 2nd DISG Webinar by Mitsubishi Corporation which implements TradeWaltz to digitalize trade documents for trading with Vietnamese companies including MSMEs. Details of the individual project will be taken up in our newsletters.

We thank everyone for your interest and support. Please look forward to the future webinar series and information dissemination through newsletters and our website, SNS, etc. The next webinar will be held on December 15th (TUE). The theme is “Upgrading Healthcare Quality in ASEAN with Digitalization”. The detail and registration process would be announced soon via email and on our website and social media.