5th Webinar: The background, significance, implications and future prospects of the RCEP from the viewpoint of evolving regional economic architecture

Dr. Tamura shared his experiences in the negotiation phase toward the signing of the RCEP Agreement in November 2020 and the result that the RCEP will bring. The RCEP agreement is one of the world’s largest EPA that consists of 15 countries; 10 ASEAN member states, China, Republic of Korea, Japan, Australia and New Zealand and accounts for about 30% of the global GDP.
The RCEP is a trade deal that further promotes trade and investment in the region. In the event of COVID-19 pandemic, the RCEP also serves as a signal to the world that the RCEP countries are committed to supporting open markets and promoting trade cooperation. Although India did not participate in the signing of the Agreement, the 15 RCEP Signatory States have confirmed that the RCEP remains open to India. Japan hopes that the RCEP would continue to develop as a regional platform through solid implementation and steady improvement of the agreement with ‘ASEAN centrality’ being the foundation of the system. Japan will continue to actively cooperate with ASEAN and other RCEP Participating Countries (RPCs) in that direction.

At first, all of 4 panelists, Ms. Anna from ASEC, Dr. Urata from Waseda University, Mr. Buban from ERIA and Dr. Damuri from CSIS, introduced their expertise and experiences related to the RCEP and provided comments on Dr. Tamura’s Keynote Speech respectively, followed by the discussion below on three main topics.

The 2nd topic was “Significance of the RCEP Agreement”. Ms. Anna emphasized that the RCEP is not only a significant Agreement that provides key benefits to the ASEAN Member States with the trade facilitation chapters beyond WTO but also an Agreement that has shown the region’s biggest contribution on regional effort for the recovery of post pandemic. In relation to Japan, Dr. Urata said that the RCEP established rule-based, good faith and open trade system in Asia region including China and Republic of Korea. Also, he introduced a recent estimate by the Japanese government that the RCEP could increase Japan’s GDP by 2.7%. Then Dr. Damuri further underlined that the RCEP will bring more than just economic benefits but it also highlights the importance of inclusive integrations. In comparison to other FTAs, Mr. Buban pointed out that the RCEP has several provisions that are not present in other FTAs such as e-commerce, government procurement, and competition. He was of the view that consolidating the rules of origin in ASEAN is also significant contribution of the RCEP.

The 3rd topic was “Implications and future prospects of the RCEP”. Dr. Damuri identified two main trends, 1) the rearrangement of supply chains, and 2) the growing importance of digital economy. He also pointed out the necessity for the RCEP to consider addressing 21st century issues such as cross border e-commerce, and expansion of its memberships. Dr. Urata agreed with Dr. Damuri’s view with the hope that Japan and ASEAN could formulate a strategy to take a leadership role in expanding frameworks such as the RCEP, CPTPP and Free and Open Indo-Pacific to other regions including Europe. Then, Mr. Buban further stated that ERIA would look into impact assessment of the RCEP and the built-in agenda with its continued technical support, research and analysis, and capacity building especially to CLM. Last but not least, Ms. Anna reiterated the significance of the renewed ASEAN and Japan 10 years Strategic Economic Cooperation Roadmap and Japan’s proposal to start a conversation on pathways towards decarbonization and the green recovery. She believes that, with both the RCEP and AJCEP, ASEAN and Japan can deepen and broaden economic relations.

Lastly, all of the panelists expressed their expectation for ASEAN-Japan cooperation regarding the RCEP Agreement and confirmed the importance of ASEAN for Japan as a trading and investment partner, and vice-versa.

Dr. Tamura Aki, Director-General for Trade Policy, Ministry of Economy, Trade and Industry (METI), Japan shared his experience as the chief negotiator for RCEP on behalf of the Japanese government, and significance of RCEP.

Since 2019, Dr. Tamura has served as the chief negotiator for RCEP and he was a lead of the Japanese government for the final stages of negotiations. Despite the pandemic, the Agreement was signed on November, 2020.
RCEP is one of the world’s largest Economic Partnership Agreement in many aspects with participation from 15 countries: 10 ASEAN member states, Japan, China, Republic of Korea, Australia and New Zealand. The total population, GDP and trade volume of the 15 countries accounts for roughly 30% of the world total. The tariff elimination rate among the countries exceeds 90%. Furthermore, the harmonization of trade rules in the region is expected to facilitate and further promote trade and investment among the region.
As stated in the “Guiding Principles and Objective for Negotiating RCEP”, the RCEP Agreement is a modern, comprehensive, high quality and mutually beneficial agreement that includes areas such as intellectual property, electronic commerce, and competition, which are not covered by existing free trade agreements between ASEAN and the AFP countries. The Agreement will contribute to the establishment of a freer and fairer economic architecture in the region.
When the Agreement was signed in 2020, the world was facing an unprecedented situation brought about by the spread of COVID-19, and protectionist movements were rampant around the globe. Dr. Tamura believes that the signing of the RCEP Agreement at such a time sent out a strong signal to the world that the RCEP countries are committed to supporting open markets, and promoting trade cooperation.
Unfortunately, India, one of the original participants in the negotiations, could not participate in the final signing of the RCEP Agreement. However, at the RCEP Summit in November 2020, the Leaders confirmed in their Joint Statement that the RCEP remains open to India. A ministerial declaration on India's participation in the RCEP was also issued stating the special treatment for India.
The RCEP is a framework that has been promoted underneath the leadership of ASEAN. Japan hopes that RCEP would continue to develop as a regional platform through solid implementation and steady improvement of the Agreement with ‘ASEAN centrality’ being the foundation of the system. Japan will continue to actively cooperate with ASEAN and other RPCs in that direction.

Self-introduction and comments to keynote speech 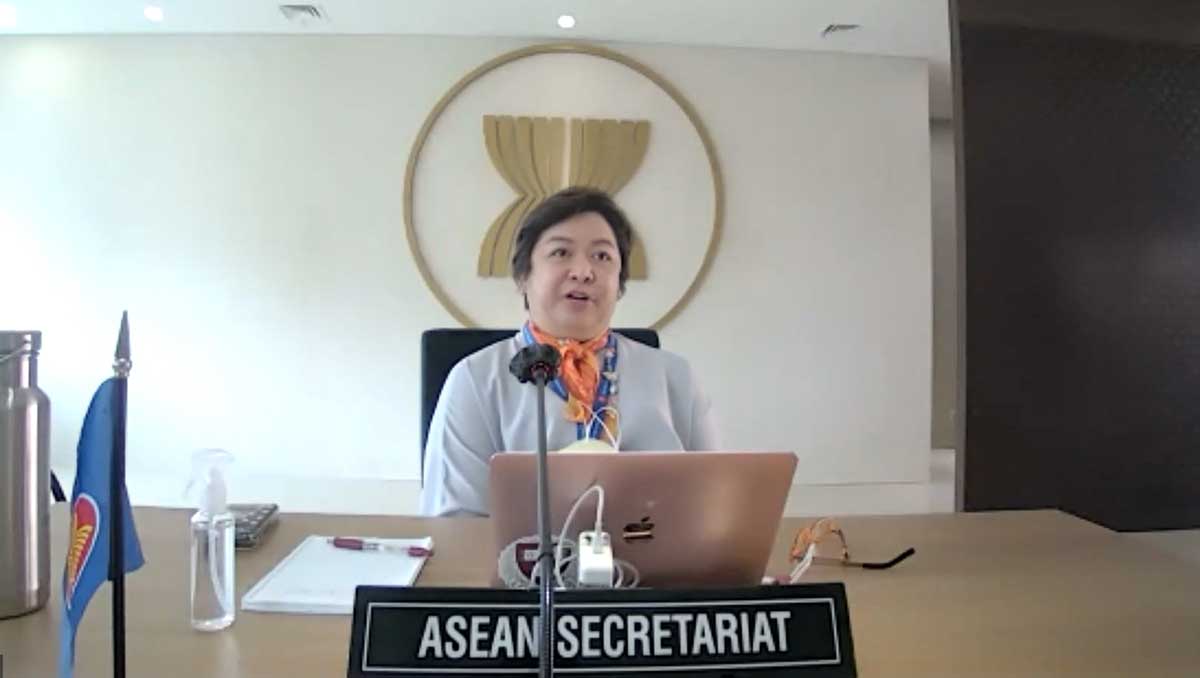 Ms. Anna was working as part of ASEAN Secretariat in the debate to consolidate the ASEAN Plus One FTAs and was directly involved in the ASEAN Plus Plus process up to when the RCEP negotiations were launched in 2012. After that she became the lead negotiator on behalf of the Philippines from the 12th round to 24th round of the negotiations. Then, she re-joined the ASEAN Secretariat in 2018 and once again got involved in the RCEP negotiations, not as a negotiator, but someone helping in the negotiations until the signing in November 2020.
Through her experiences not only as the lead negotiator from Philippines but also as a member of ASEAN Secretariat, Ms. Anna has the point of view of Philippines’ national interest, that of ASEAN member states, as well as that of non-ASEAN countries participating in the negotiations.
She commented it is indeed unfortunate that after all those rounds of negotiations, India was not able to join the finish line. However, all is not lost, as the RCEP Agreement remains open to India, should they decide to join anytime. 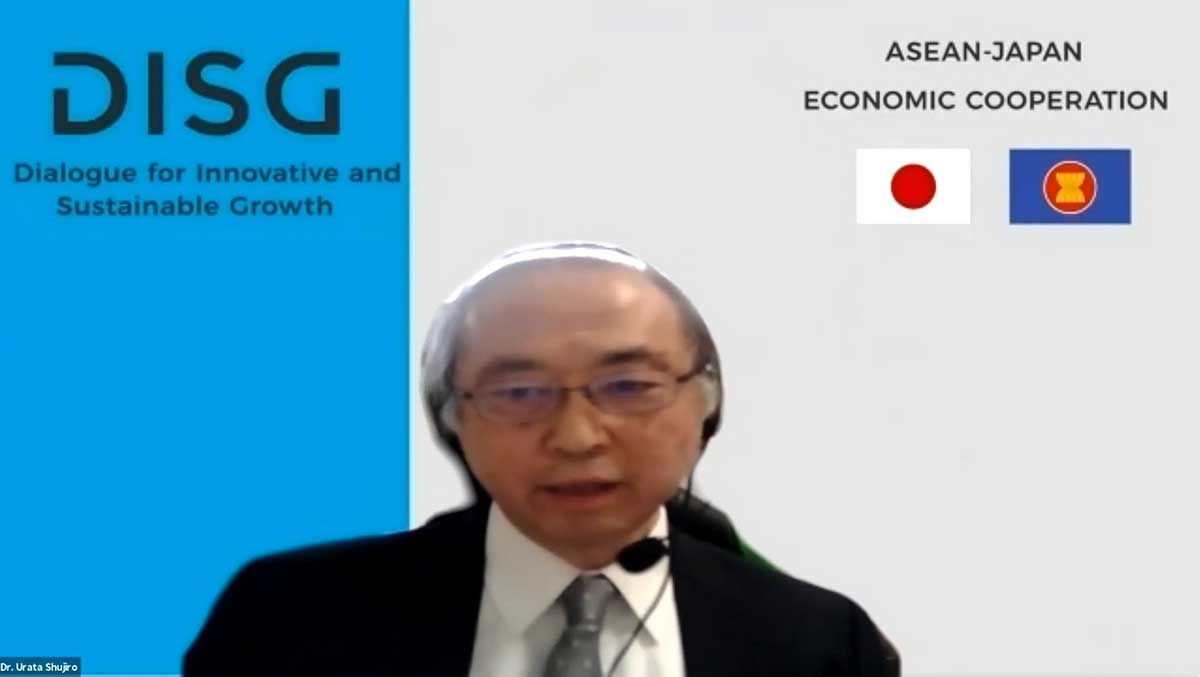 Dr. Urata Shujiro, Professor Emeritus, Waseda University, sharing his viewpoint on RCEP based on deep insight coming from his research and a lot of discussions with the government officials.

Dr. Urata is a Professor Emeritus at Waseda University who specialised in trade and investment and recently he is working on regional economic integration. He has never been in a government, so he has been looking at the developments concerning regional economic integration, such as the RCEP, from outside the government. However, through his experiences of participation in “Track II” meetings, he learned quite a lot about RCEP and other similar negotiations from talking with the government officials.

Dr. Urata found the Keynote Speech very objective, but at the same time, it brought up very important contributions that the RCEP has made in establishing rules based, fair and free trade environment in Asia. 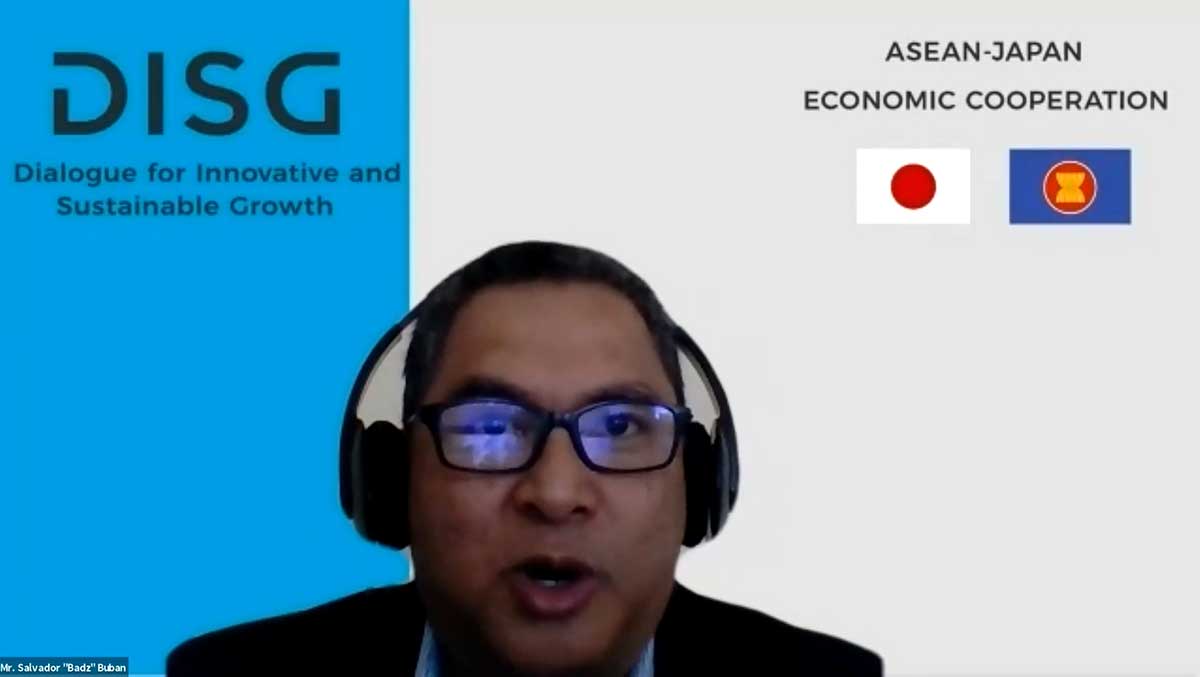 Mr. Buban is a policy fellow of ERIA who specialized in trade policy formulation and negotiations. He has been involved in the negotiations of the various ASEAN Plus Ones, FTAs as either representing the Philippines government, or as an officer of the ASEAN Secretariat. He was involved in the RCEP negotiation since 2017 until the RCEP conclusion and signing in 2020. He provided technical support and advice on key issues especially the rules of origin, provisions and tariff differentials for trading goods. He was the only non-government official who was allowed to participate in the actual RCEP negotiations.

Mr. Buban agreed with Dr. Tamura’s view on the significance and the timing of the RCEP signing especially now that the world is in recovery from the pandemic. Despite difficulties faced, the negotiators continued to persevere, knowing the potential benefits of RCEP to the participating countries individually and to the East Asia as a region. The signatory states of RCEP also keep the door open for India, with the special treatment to be joined at a later stage, which signifies how they recognize India as an original RPC, and its role in the EA region.
From Mr. Buban’s view, it may take a while for India to join, noting the highlighted issues by India during the negotiations. However, he is optimistic that India will join at a later stage, so that the RCEP will be able to have a wider and larger coverage. 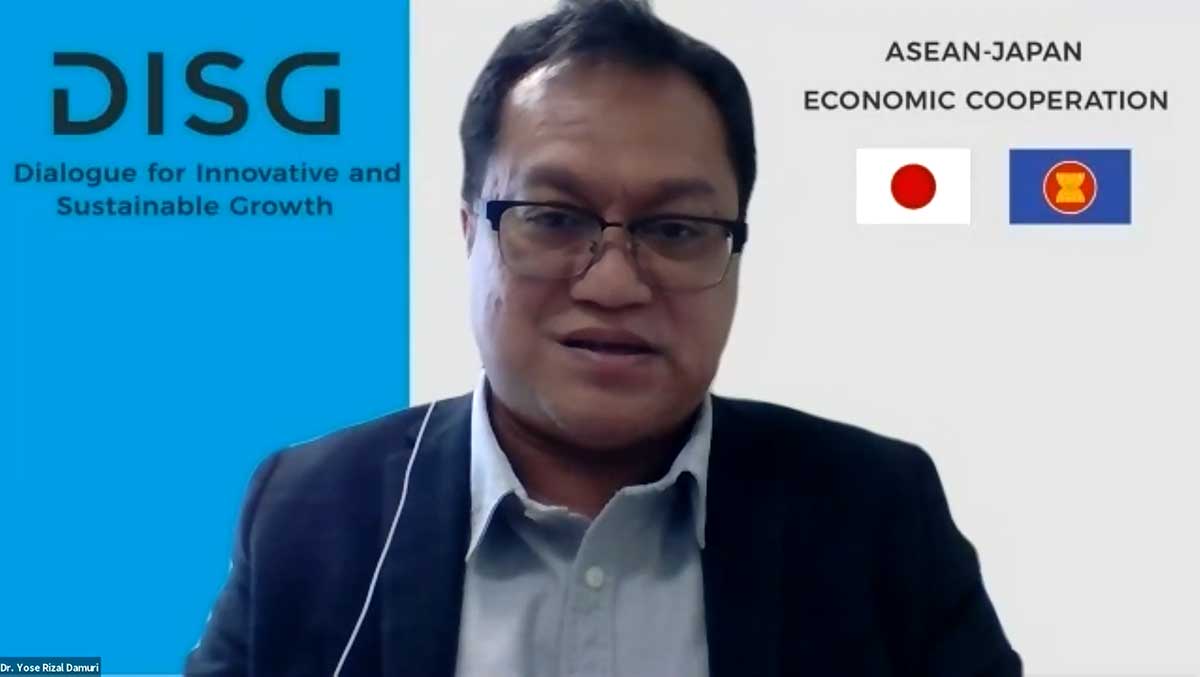 Dr. Yose Rizal Damuri, Head of the Department of Economics, Center for Strategic and International Studies (CSIS), Indonesia, mentioned the RCEP is going to be a game changer for regional integration.

Dr. Damuri is a head of Department of Economic of CSIS Indonesia. CSIS is a policy oriented research institution that pays attention on various issues, including regional integrations, especially the economic aspects.
He has been following the development of the RCEP since the beginning in 2011. He has good relations with the government officials from several countries in ASEAN and through discussions in particular about the developments of the RCEP negotiations. He believes that RCEP is a really big achievement for ASEAN, and also for other countries in the region to come up with mega regional trade agreements.
The RCEP Agreement is going to be a game changer for regional integration in economic aspects. There are many other initiatives in the region, such as the CPTPP (Comprehensive and Progressive Agreement for Trans-Pacific Partnership), where some other countries in the region are involved. The issue is how to make those regional integration initiatives aligned and complementary to each other.

Pillar 1: Background and development of the RCEP negotiations

Background and development of the RCEP negotiations, roles ASEAN and AFPs played

The notion of ‘ASEAN centrality’ regarding the RCEP

The role Japan played in the RCEP negotiations

Academic contribution of ERIA in relation to the RCEP

Pillar 2: Significance of the RCEP Agreement

Significance of the RCEP Agreement to Japan’s EPA/FTA policies

Pillar 3: Implications and future prospects of the RCEP

Possible ASEAN-Japan cooperation toward ensuring the RCEP Agreement a success

Scope for organizational contribution by ERIA

Expectation for ASEAN-Japan cooperation regarding the RCEP Agreement